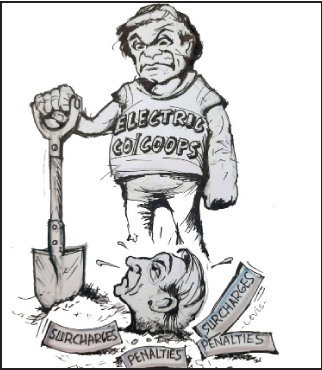 Some people call them the snowflake generation. This refers to young people of today who are so used to being babied and whose lives are so secure that they end up without emotional intelligence and backbone.

They grow up with nannies, while our generation took care of ourselves and our siblings. They play video games, while we played with real people. They can write papers without going to the library, while we had to pore over moldy index cards and dusty books in damp, dark school libraries. They have the luxury of online enrollment, while we slept overnight in school buildings and organized ourselves into enrollment brigades to secure a slot in our classes. They have tutors, while we had only ourselves and the handy old exams. Their classes are suspended on the basis of a forecast of heavy rains, while we had to brave flooded streets and falling branches to attend classes that were suspended only when the typhoon warning was signal number three.

We are a generation that grew with teachers as disciplinarians. I remember being whacked with a stick, pinched and asked to squat in front of the entire class. But it never occurred to me to report it to my mother, not only because she was also a teacher but more because I knew that she would probably give me another scolding for being unruly. It was the time when the word “child abuse” was not yet part of ordinary discourse.

The other word that was not yet defined at the time was “bullying.” We all thought it was simply part of growing up, to test our willpower to survive and fight adversities. As a boy from a small town, I was never bullied by my city-bred classmates because I made myself available for friendship. Some tried but I simply looked at them, shrugged my shoulders, ignored the attempt and made them feel that I didn’t care. This is how I became what I am now — fiercely independent.

It is unfortunate that our generation, which grew up independently, has turned our children into dependent wards. We who did not have nannies now shower our children not only with one but two house help. We who grew up without being tutored by our parents and learned by ourselves now spend so much for tutorials, file leaves during exam season to make sure our children study and turn livid when they have low grades. We who would have been horrified at the thought of our parents appearing in school to lawyer for us not only when we get pushed by classmates but also when we get low grades, now would march into the office of the principal to complain about our children being maltreated by peers, scolded by teachers and given low grades.

We really don’t know the exact moment that led to this shift in parenting that we have brought upon our children, which is very much different from how our parents reared us. We are proud of our generation, and we love to boast about how independent and resourceful we were, but we end up rearing snowflakes.

Perhaps, it is an excess of parental love, of vowing not to let our children experience the hardship and inconvenience we had to go through, that turned us into parents who emotionally handicapped our children. We denied them the opportunity to learn from their mistakes, take the fall constructively and lick their wounds as they march toward the other challenges that would come their way as they traverse the complicated pathway called life. We are the generation which learned how to keep ourselves warm, but now have children whose definition of a sweater is that it is something they have to wear when we feel cold. For indeed, we never ask them if they feel cold. We just insist they wear sweaters when we feel chilly.

In critical theory we have a label for this. We call this objectification, which is the process by which we deny our children their right to choose for themselves. We objectify them by assuming that they like the clothes that we force them to wear. We always assume that they are pleased to dance or perform for our houseguests. Worse, they become the embodiment of our frustrations. We force them to take ballet, piano and soccer lessons because we ourselves wanted but weren’t able to take these lessons when we were young.

It is also our generation that turned the liberal ideas of our times into an explosion of a discourse of rights. This is a mere extension of the human rights discourse to protect people from the inhumanity of war to now take on even the rights of the marginalized and vulnerable, including children. This is not to say that children have no rights. In fact, children have to be protected from structural violence of war, poverty, hunger, disease and illiteracy.

But it becomes problematic when the discourse of rights is weaponized to blunt the equally compelling need to discipline children and strengthen their survival skills, that even the simple act of a parent or a teacher to correct a problematic behavior is now construed as child abuse.
There are indefensible acts of bullying. But sometimes we adults become too overprotective of our children that even what would otherwise be construed as simple banter become serious incidents of bullying.

There is nothing wrong in protecting our children, until it becomes an impediment to their growing up as mature, autonomous individuals capable of surviving in a world that is beyond our control, and theirs. And it becomes patently problematic when opportunistic adults exploit children’s rights to advance their personal interests or to feed their messianic fixations. We just saw the ugly side of it when Raffy Tulfo, in the guise of advancing the rights of a child, publicly stripped a teacher of hers.

Anti-Marcos groups urge SC: ‘Side with the truth’

Ombudsman hits back: We won’t be intimidated