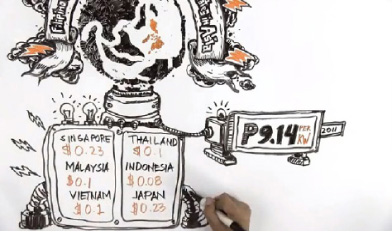 By: Lala Rimando and Emil Mercado

Filipino consumers paid the highest rates of electricity in Asia.
Why, we paid an average of 9 pesos and 14 centavos per kilowatt hour a month in 2011 or about 25 dollar cents in 2012, more expensive than Singapore, Thailand, Malaysia, Indonesia, Vietnam, and even industrialized Japan.
The electricity bill reflects the following, the power plants that process energy from sources like coal and fuel turn them into electricity that lights up our homes, streetlights, powers or gadgets, and keeps our factories going. These generation charges account for over half of the bill then the cost of transporting the electricity still in its high wooded form from the power plants through transmission powers to the power distributors is reflected in the transmission charges.
Distributors charged for bringing power already reduced to 220 volts to us users.
Systems loses refer to the electricity wasted because they were lost in transmission or were pilfered.
Universal charges are various cost passed on to consumers and subsidies are discounts given to senior citizens and lifeline consumers who are using less than 100 kilowatts a month then of course government taxes.
All these are moving parts. They go up or down and usually they go up. The bill is high because some cost of operations increased. For example, almost half of our energy sources are coal and oil mostly imported from the Middle East, but these are capital intensive businesses that also have to recover through profits.
To encourage investments, the government guarantees their margin. When companies import, the foreign exchange fluctuations may be expensive and aid to their guaranteed profits. They can be covered through the ICERA or the Incremental Currency Exchange Rate Adjustment Mechanism.
The power plants formerly owned by state owned NAPOCOR can also recover profits. If the purchased power and fuel costs aid into these guaranteed margins refill this via GRAM or Generation Rate Adjustment Mechanism which increases the generation charges. The same for state owned Transmission Company or TRANSCO.
If the cost of transporting high voltage power to retailers pull down their assured profits of 15%, they can be covered through TRAM or Transmission Rate Adjustment Mechanism and NAPOCOR, which is lifted bringing light to far-flung areas or islands also pass on the cost of SPUG or Small Power Utilities Group most of them using expensive diesel.
These are added to our bill through universal charges and because they are public utilities, what goes up and down in our electric bill required the approval of the Energy Regulatory Commission. In the past, the state owned NAPOCOR was inefficient. In the 1990s, ruling blackouts prompted government to promised investor it will buy all the supply generated by the independent power producers. When the Asian financial crisis struck in 1997-1998 demands load down, but consumers still pay for excess supply. Worst in 2002, the government did not let NAPOCOR which had incurred a lot of debts charged higher fees. These resulted in NAPOCOR’s massive loses that we are now paying for.
The Electric Power Industry Reformed Act or EPIRA was introduced in 2001 to address the sins of the past. The new law broke apart NAPOCOR’s monopoly of generation and transmission businesses. Through Power Sector Assets and Liabilities Management Board or PISAM, the state owned power plants were sold to private investors. The transmission service was sold to a Filipino-Chinese consortium called National Grid Corporation of the Philippines or NGCP. The debts of NAPOCOR amounting to $6.5 billion in 2001 were partly assumed by national government and the rest are charged to our bill over time. This is reflected in the universal charges.
PISAM, while it was supposed to earn revenues from the privatized power plants incurred debts because it was not able to immediately sell some of them so it had to maintain this aging plants. PISAM will recover this debts worth about P130 billion via universal charges. NGCP on the other hand are recovering some of NAPOCOR’s debts.
Before the transmission assets were turned over through TRAM, these profit related reasons and sins of the past are passed onto us consumers and are tucked in the electricity bill.
Another item is the feed in tariff. This is to encourage investors to tap renewable sources like geothermal, hydro, wind, solar, biomass, and run of fever energy. Because these are from indigenous sources, they could eventually reduce electricity prices. These are not dependent on coal and oil imports, which are vulnerable to foreign exchange volatility, but what should really drive electricity down are market forces.
The EPIRA created the WESM or the Wholesale Electricity Spot Market. It is where power producers sell their electricity units and customers buy at a price they want.
These systems, the EPIRA promised were supposed to be placed in 2011. However, there are still few generation players and those who have built new power plants are not generating enough electricity to make trading at WESM a truly competitive and thriving one. Buyers are not yet bidding for the lowest price but for the available supply. When there are more new power projects and the private sector will stake more power capital in them then electricity bill will soon be lowered.