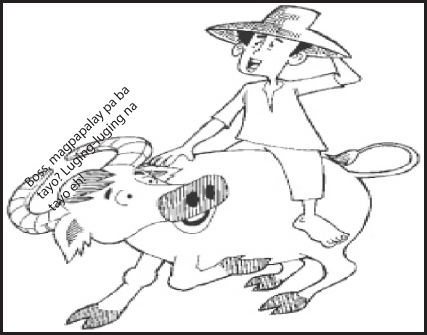 First word
ALAN Peter Cayetano must think Filipinos will believe anything when he declares before the Senate that the P55-million cauldron for the Southeast Asian Games (SEAG) is “a work of art.”
But there are some of us who do take art seriously (having studied and worked in the arts and the humanities) and who consider it a gross national deception when a high government official foists something as pedestrian as a cauldron on the nation as an aesthetic monument.
That the official who dared to do this is Alan Peter Cayetano will surprise no one. The man has perpetrated so many outrageous things in his career on our public life, that he figures to easily get away with this one.
But if, as he contends, the Southeast Asian Games (SEAG) cauldron is a work of art, the nation should in turn ponder the growing reality that the Speaker of the House of Representatives in Congress is a “real piece of work.” And it may be seeing now only the tip of the iceberg.
The reality underneath could be sordid.

The idiom fits Alan Peter to a T.
He has parlayed his half Filipino-half American lineage and training in law into a career in national politics, and he has managed to reach as high as the Senate and the House speakership.
No local politician has arguably done more outrageous things in our public life than Cayetano has, and yet has stuck in the nation’s gut without being vomited out.
Cayetano introduced the idea of term-sharing in the election of House Speaker in Congress, setting aside the traditional way of selecting the congressional leadership, so he could maneuver to gain election as the first among the term sharers.
In the May 2016 elections, Cayetano led his family in a crooked scheme to keep all top elective positions in Taguig-Pateros within the family.
Despite losing his vice presidential bid as the running mate of Rodrigo Duterte, Cayetano has craftily milked this connection to extract political favors and assignments.
He got himself appointed as Secretary of Foreign Affairs under Duterte.
He secured the chairmanship of the organizing committee for the 2019 SEAG, and then placed his own foundation in position to profit from the games.

P55-million cauldron
To the credit of Senate minority leader Sen. Franklin Drilon, he is the one who exposed the scandalous construction of a P 55-million cauldron for the SEAG in new Clark City, which in turn is leading to the exposure of a much bigger financial scandal in the sports extravaganza.
Drilon has vowed to lead a Senate investigation on SEAG immediately after the conclusion of the games on December 10.
For now, there can be no investigation or inquiry, because the games must go on as planned, and because the Philippines is committed to host the 30th SEAG and turn it into the biggest regional games ever.
The exposure of the anomalous and irregularities will come later. But there will be no hiding the stink that lies at the heart of the financing and organization of the 2019 SEAG.
The extravagant million-dollar cauldron is ironically the least scandalous in the entire SEAG saga.

P7.5-billion fund diversion
The first anomaly is how Cayetano, who has never been involved in any sport, got himself appointed as chairman of the organizing committee for the 2019 SEAG.
The second anomaly is how Cayetano, as then foreign affairs secretary, effected the unconscionable diversion of the P7.5 billion budget for the Philippines hosting of the 2019 SEAG to the Department of Foreign Affairs (DFA).
Cayetano requested the fund transfer when he was still the Secretary of Foreign Affairs, and in his capacity as designated chairman of the organizing committee for the 2019 SEAG in the country.
The foreign affairs department has absolutely nothing to do with the SEAG event, or Philippine participation in the competition, other than documentation of foreign participants, officials and visitors.
Hosting and organization of the SEAG is principally the business and responsibility of the Philippine Sports Commission (PSC) and the Philippine Olympic Committee (POC).
Rectification of the mess was quick upon exposure of the fund diversion. Responsible executive branch officials moved with dispatch to correct the situation. It was shortly announced that the P7.5 billion budget for the SEAG would be transferred soonest from the coffers of the DFA to those of the PSC.

Cayetano and Medialdea
My columnist colleague Ramon Tulfo has written a column which discusses in detail how Cayetano was allegedly assisted by Executive Secretary Salvador Medialdea in his scheme to turn the 2019 SEAG into a personal financial bonanza.
In his July 20, 2019 column (“There goes Cayetano as House speaker; also Medialdea”), Tulfo wrote:
“President Digong said there was corruption in the preparations for the holding of the 30th Southeast Asian Games to be held in the country in November this year.
Cayetano heads the Philippine Southeast Asian Organizing Committee (Phisgoc), which oversees the preparations for the games that are being hosted by the Philippines.
“But the scandal at Phisgoc, involving hundreds of millions of pesos, may change the President’s mind about Cayetano.
“President Duterte may also change his mind about Executive Secretary Salvador ‘Bingbong’ Medialdea for his endorsement of and support for Cayetano in the questionable multi-million-peso program.
“The scandal involves the gross overpricing of athletes’ uniforms and collection of donations from private corporations when Phisgoc is funded by the government to the tune of P6 billion.
“You know how Phisgoc, which is headed by Cayetano as chairman, was able to justify the donations from the private sector?
“They set up the Phisgoc Foundation, supposedly a nonprofit private entity.
“Phisgoc Foundation, which Cayetano also heads as chairman, collected close to a billion pesos from private companies, including San Miguel Corp. and the MVP Group.
“This is not to mention the P200 million that the Philippine Amusement and Gaming Corp., a government entity, gave to the Phisgoc Foundation.
“Phisgoc, the government entity, says the P6 billion set aside to fund the 30th SEA Games is intact.
“However, there is no accounting for the private donations amounting to, I repeat, close to a billion pesos.
“Cayetano was appointed by the POC as chairman of Phisgoc. He then created the Phisgoc Foundation without the knowledge of the POC.
“Cayetano went to Executive Secretary Medialdea to ask him to support the private Phisgoc Foundation.
“Medialdea, apparently without the President’s knowledge, issued Memorandum Circular 56 ordering all government agencies and government-controlled corporations to support the Phisgoc Foundation.
“The circular, issued on Jan. 25, 2019 to take effect immediately, was signed by Medialdea, ‘by authority of the President’.”

Bishop on killings: Filipinos ‘quiet like in time of Hitler’

Has ‘overwork’ taken on epidemic proportions in the country?